A Matter of Taste by Jon Hurley 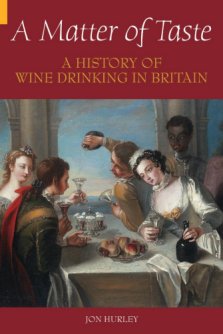 From the Sack of Shakespearean England to the supermarket Chardonnay of the twenty-first century, wine tastes in this country have changed dramatically. This book takes an irreverent (yet-impeccably-researched) look the development of our national tastes. The eclectic scope of the book includes a detailed discussion of the wine list at the coronation of George VI, the impact of French Chateau legislation in 1855 upon the obsessive Victorian claret fiends of the day, the explosion of Hock as the typical plonk of the 1970s and the many frauds, marketing ploys and outrages perpetrated on the traditionally naive British market over the years. Lavishly illustrated with paintings, photographs, labels and woodcuts, this light-hearted journey through the cultural history of wine wears its learning lightly and is a wonderful book for anyone who enjoys a glass or two.

…Jon Hurley has persuaded me that taste in wine is as significant in the evolution of society as taste in art. The British have relished wine by way of relishing the world. And the French and Germans have shaped our temperament as much through their wine as through their spasmodic attempts to invade and annihilate us. – ROGER SCRUTON for the NEW STATESMAN [Full article]

Despite a chapter entitled “Wine Writers: Necessary Parasites”, Jon Hurley’s “A Matter of Taste” is a relentlessly entertaining, irreverent, and probably libelous collection of mini-essays on every conceivable aspect of the social history of wine … Delve around for nuggets like a Tanner’s list containing Australian Cabernet in 1893, and some beautiful picture plates.’ – Reviewed in January 2007

“The author’s enthusiasm and witty approach beguile and delight the reader while offering an education into the subject at the same time. Jon helpfully dismisses a good deal of the stuffiness surrounding wine tasting. “A Matter of Taste” is a book to be savoured like a good wine. It could become a handbook for anyone wishing to dazzle with their knowledge of wine and its origins.” – CHRIS ROBERTSON, journalist, February, 2006

“This book takes an irreverent (yet impeccably researched) look at the development of our national tastes. Lavishly illustrated with paintings, photographs, labels and woodcuts, this light-hearted journey though the cultural history of wine wears its learning lightly and is a wonderful book for anyone who enjoys a glass or two”. – BLACKWELL’S on Line

Sub-titled ‘The History of Wine Drinking in Britain’, I enjoyed this book much more than I thought I would, fearing initially that it would be bone-dry in style. Instead, author Jon Hurley (who works in the wine trade but who’s previous book was on the history of bare-knuckle fighting) has written a very thorough and comprehensive history book, but has peppered his text with irreverent tales of dirty goings on in the wine trade, frauds and back-firing marketing ploys, that keeps it engaging and easy to read. There are nicely done illustrations, from paintings and photographs to labels and advertising materials that bring many of the points in his timeline to life. – WINE-PAGES.COM

Wine for Game and Fish, The Sporting Wife’s Wine Companion by Jon Hurley, 1986